Home » Products » The Complete Guide to the Tatshenshini River: Including the Upper Alsek River 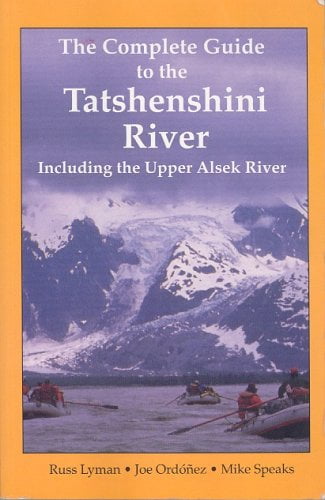 The Complete Guide to the Tatshenshini River: Including the Upper Alsek River

The Complete Guide to the Tatshenshini River: Including the Upper Alsek River, by Russ Lyman, Joe Ordóñez, and Mike Speaks

Authors Lyman, Speaks, and Ordóñez distill their combined experience of over 30 years, with over 100 trips down the Tatshenshini and Alsek Rivers, into this interesting and informative guide. Includes: trip logistics, geology and natural history, native and historical information, 21 maps, and 45 photos and illustrations.

About the Authors:
Mike Speaks is a graduate Forester who has lived and guided in Alaska for 30 years and has guided on the Tatshenshini and Alek Rivers since 1988. Besides guiding in Alaska and Canada, he has pioneered rafting in Pakistan, been a naturalist on board Arctic and Antarctic ships, and led treks in Bhutan. Mike was expedition leader for a National Geographic Team that traveled 590 miles for 30 days down the Blue Nile River in Ethiopia. He has rafted on the Zambezi, Bio Bio, Omo, and Indus Rivers, and done first descent exploratories all over the world. He lives in Denali Park, Alaska and calls the Tatshenshini/Alsek River system his second home.

Joe Ordonez is a writer, photographer, naturalist, and wilderness philosopher. He graduated in 1983 from Huxley College of Environmental Studies with a B.S. in Environmental Education. He began guiding on the Tatshenshini and Alsek Rivers in 1988. Joe lives in a semi-remote cabin in Haines, Alaska, with his wife, Edie, and daughters, Stella and Sapphire. Together they own and operate their tour company Rainbow Glacier Adventures.

Russ Lyman grew up in northwest Washington State. He received a B.S. degree in Visual Communications from Western Washington University and then spent a couple of years in Ketchum, Idaho. In 1989 he began his river guiding career in Haines, Alaska, and started guiding on the Tatshenshini and Alsek Rivers in 1990. He has also worked as a river rafting guide in the Arctic, Chile, Indonesia, Nepal and Ethiopia. He lives in Haines, Alaska with his wife Cynthia, where he runs his publishing business, Cloudburst Productions. He is also pursing a career in Physical Therapy.

There are no reviews yet.

Be the first to review “The Complete Guide to the Tatshenshini River: Including the Upper Alsek River” Cancel reply

This site uses Akismet to reduce spam. Learn how your comment data is processed.