River Piracy…Without the Skull and Crossbones 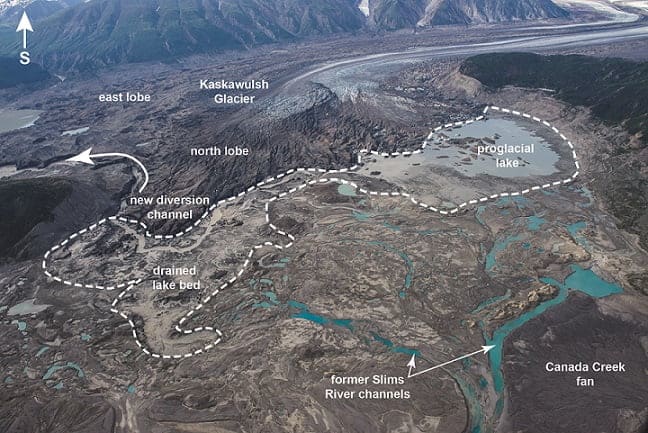 Over the past century many of the glaciers in Alaska and Canada have retreated due to Global Warming.  One of these glaciers is the Kaskawulsh Glacier located in the Yukon Territory of Canada.  This glacier has historically been the source of the Kaskawulsh River and the Slims River.  The Kaskawulsh flows south eventually  joining the Dezadeash to form the Alsek, eventually draining into the Pacific Ocean.   The Slims River flows north and has been the main input of water into Kluane Lake, the largest lake in the Yukon.  Kluane Lake is 50 miles long and covers  an area of 158 square miles.   The output of Kluane Lake flows into the Yukon River and on to the Bering Sea.  In May of 2016, the Slims River suddenly reduced to a trickle and the Kaskawulsh became much larger.  This was due to a new diversion channel that developed as the glacier continued to recede.  This new diversion channel developed  around the toe of the Glacier and caused the proglacial lake that fed the Slims river to drain into the Kaskawulsh River.  This capture of the one river by another was documented in a study by the University of Washington Tacoma and is the first known case of “River Piracy” in modern times.  Dan Shugar, a geoscientist from the University of Washington Tacoma, commented that “Geologists have seen river piracy, but nobody has documented it happening in our lifetimes.”    Shugar continued by saying “People had looked at the geological record–thousands or millions of years ago–not the 21st century, where it is happening under our noses.”

It is also interesting to note that until about 300 years ago the Slims River flowed south out of Kluane Lake and was part of the the Alsek River drainage.  Then during what has been termed a Little Ice Age somewhere in the late 1600s or early 1700s the Kaskawulsh Glacier advanced and completely blocked the Slims River.   This blockage stopped the southern flow out of Kluane Lake and caused the Slims River to reverse direction.  This in turn caused Kluane Lake to develop a new outlet on its northern shores which fed the Yukon River drainage.  This outlet is the Kluane River and still exists today.

The effects of this river piracy were noticeable almost immediately.  Over the summer of 2016, Kluane Lake dropped about 3 feet causing marinas to be inaccessible.  In addition the exposed lake bed caused dust storms.  The lower lake levels have also resulted in lower flows in the Kluane river causing concerns about reduced habitat for spawning salmon, and the animals that depend on the salmon as a food source.  On the other side of the coin, the Alsek River drainage has seen a substantial increase in flow.  From a river running standpoint this means a change in campsites, how rapids are run, and an overall faster, higher volume river.

Below are comparison photos taken of the Kaskawulsh Glacier and its outlets in June 2015 and June 2016.  Some of the interesting things to look at are the Slims River, Kaskawulsh River and the changing sizes and shapes of the proglacial lakes.  It is also worth taking note how Kluane Lake has shrunk exposing the vast gravel and dust plain of the Slims River. 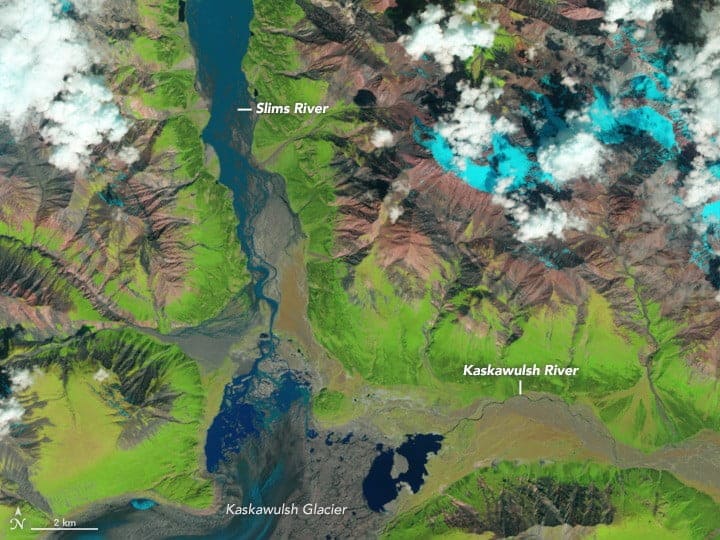 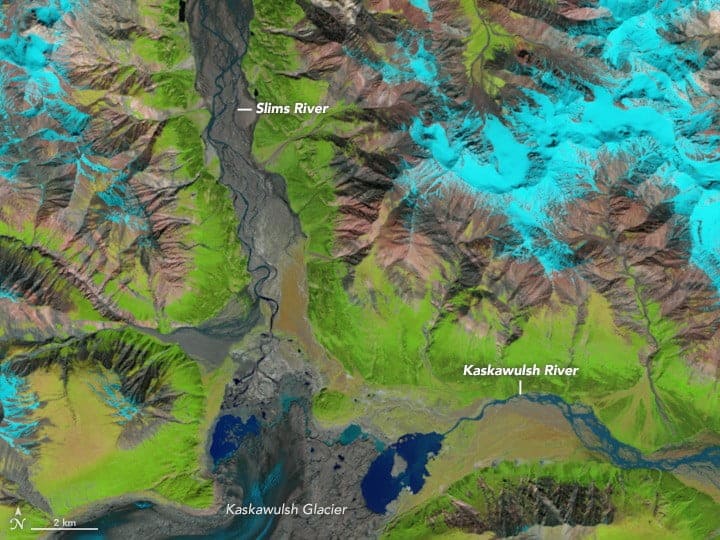 It is amazing to see such big time geology happening on a river system we operate on.  Below is a larger photo taken from Google Earth showing the Tatshenshini-Alsek River System along with the Kaskawulsh Glacier. 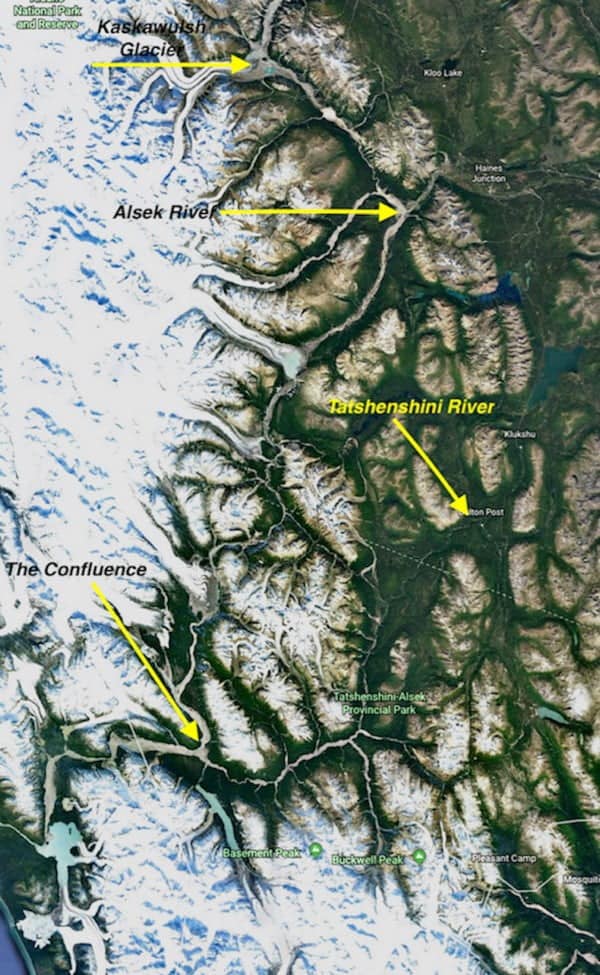 Here is another shot from Google Earth showing where the Alsek River Drains as opposed to the Yukon River. 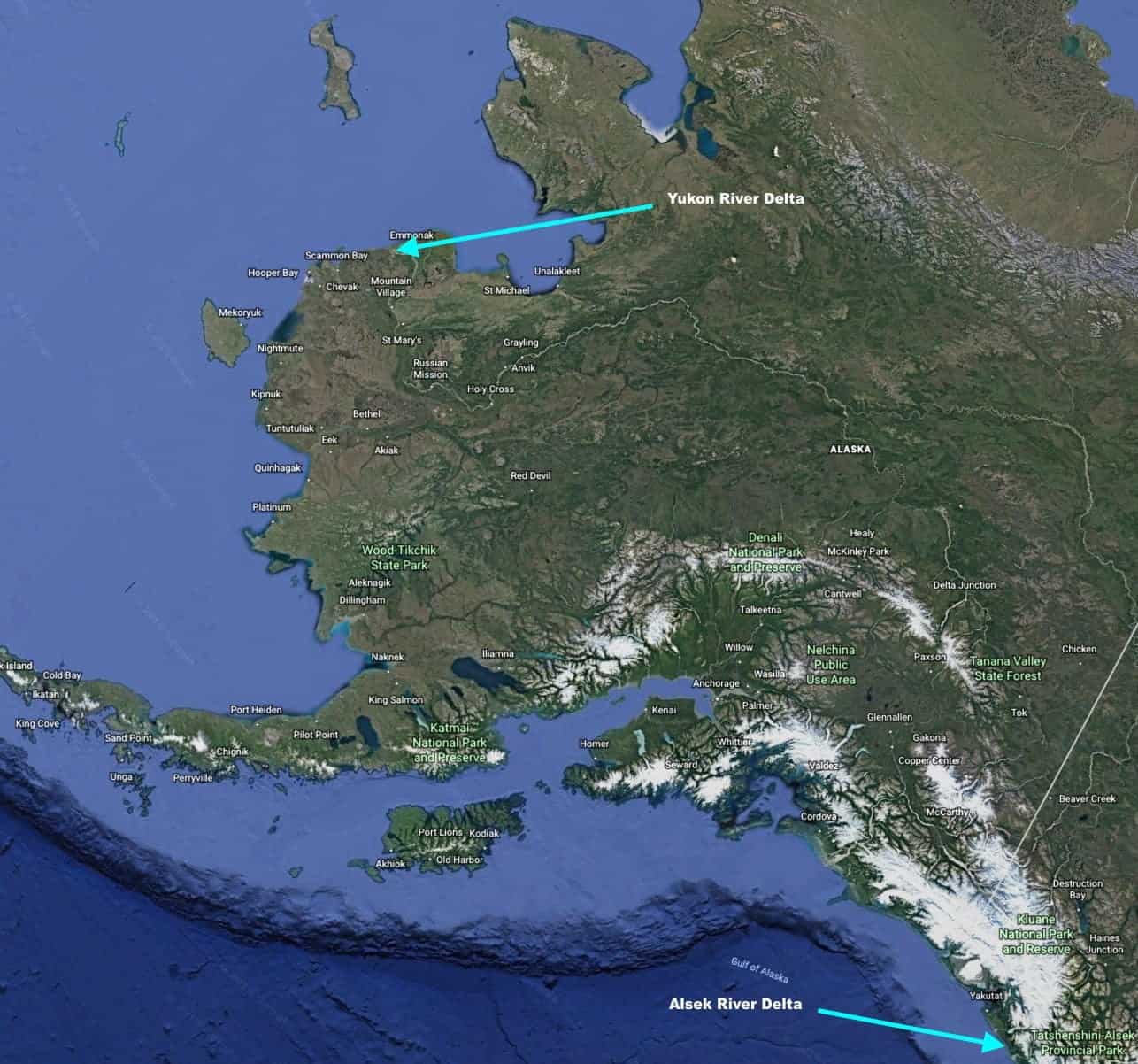 Between 2010 and 2015, we have noticed a similar occurrence to what is happening with the Kaskawulsh Glacier at the Fisher Glacier.  The Fisher Glacier is located just below Lava North Rapid on the Alsek River adjacent to where the Alsek River above Bates River and Tweedsmuir Glacier River Gauge is located.   On our first CRATE Alsek Rafting Trip in 2010 we camped at a beautiful sandy beach located at the mouth of the upper outlet of the fisher glacier.  Martha Clark cooked delicious halibut fish tacos and Mindy Mackay spotted a wolverine running up the scree slopes behind camp.  The next day we passed the lower outlet from Fisher Glacier and it was noteworthy because of what a big volume of water was coming down it.  Over the next few years our trips didn’t camp in the area. 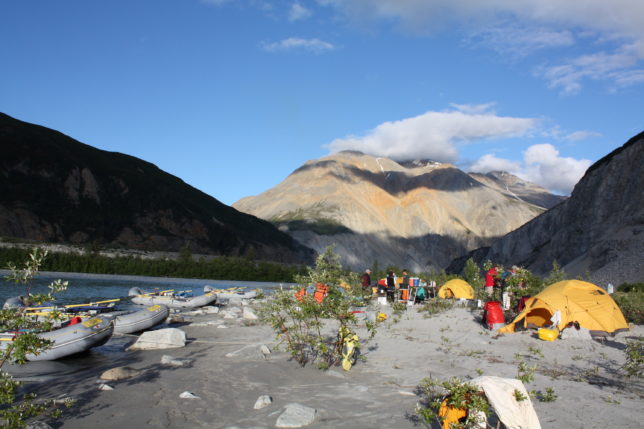 Then, in 2015 we noticed the small clear glacial outlet was a raging silt laden river with 10 foot haystack waves extending all the way into the main channel of the Alsek River. The raging torrent completely covered the camp and even if it had not, there would have been absolutely no way to access it.  The the next day we passed the lower outlet and it was essentially dry.  Apparently as the Glacier had melted back during these 5 years the lower channel had been captured by the upper channel.  In this case the water ended up in the same river only a few miles away, in contrast to what has happened at the Kaskawulsh where the Slims River water now enters the Pacific Ocean instead of the Bering Sea over 900 miles apart. 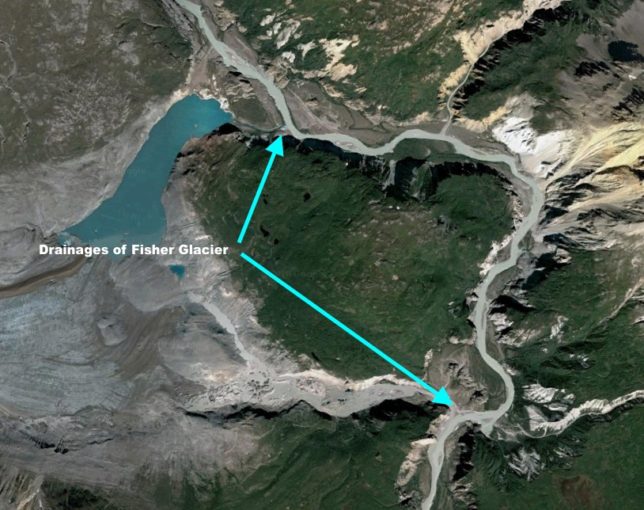 A cool thing to note is this geology can be related to the Grand Canyon.  In Wayne Ranney’s book “CARVING GRAND CANYON Evidence, Theories, and Mysteries,” Wayne gives a synopsis of the Museum of Northern Arizona’s Bulletin #44.  This bulletin breaks down the formation of Grand Canyon into 5 stages and includes the possibility that the Marble Canyon section of the Grand Canyon was carved by an ancestral river that flowed through the same drainage as the Little Colorado River today.  This river may have been captured by headward erosion through the Kaibab Plateau by what is referred to in the bulletin as the”Hualapai Drainage System.”   Resulting in the Colorado River in Marble Canyon following the present day course of the Colorado River through Grand Canyon, and the Little Colorado River becoming a tributary of the river system.  This is a different vehicle to stream piracy than the melting of a glacier, but accomplishes the same process.  It is also believed that the River Thames in Southern England had its course altered 450,000 years due to an expanding ice sheet.   Other geologic vehicles that have resulted in Stream Piracy besides Glacial Melting, Headward Erosion, and Glacial Damming include Tectonic Uplift and Karst. 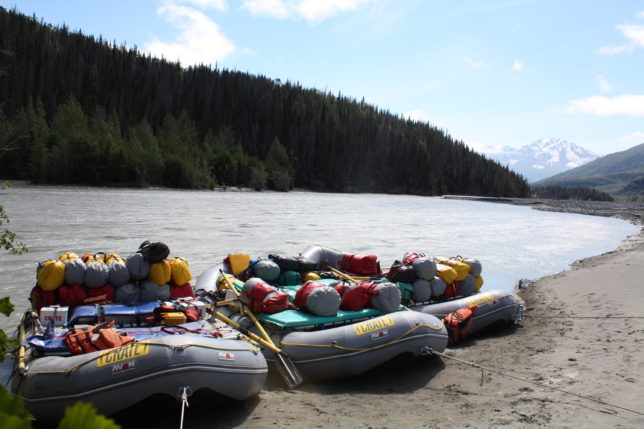 Rafts on the Tatshenshini River