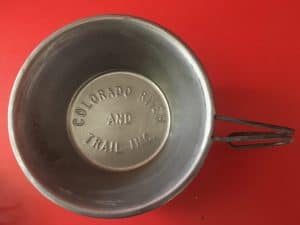 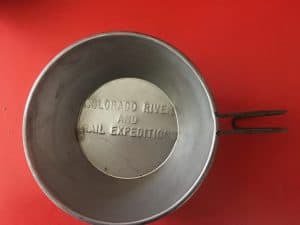 A few months ago while organizing and cleaning up some of our old gear we came across some “Colorado River & Trail Expeditions” stamped Sierra Club cups.  Before we switched over to insulated plastic and stainless steel cups 30 years ago, sometime in the 1980s we outfitted our guests and guides with Sierra Club cups.   They were in some ways the swiss army knife of early river running.  They were used to lift coffee pots and dutch ovens off of driftwood fires; drink coffee, tea, water, lemonade, and hot chocolate; consume meals and desserts; measure out ingredients, cook with, and purify drinking water over the fire.   They were usually worn on the belt and didn’t come off except for sleeping.  They are a symbol of a different time in river running when the experience was absent of many of the creature comforts of todays elaborate expeditions.   A time when it was standard practice to burn your lip on the steel rim of the Sierra Club Cup while drinking your morning coffee. 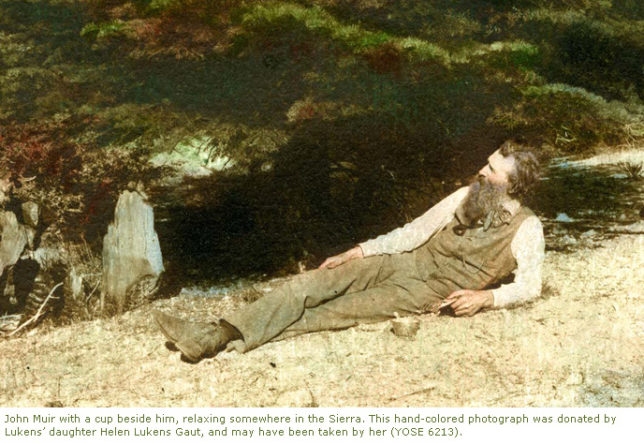 John Muir relaxing with his tin cup that would later evolve into the Sierra Club cup.

John Muir whose environmental activism helped to preserve and protect the Yosemite Valley, Sequoia National Park, and many other wilderness areas co-founded the Sierra Club along with Professor Henry Senger, a philologist at the University of California-Berkeley in 1892.  Muir was famous for trekking through the wilderness with “only a tin cup, a handful of tea, a loaf of bread, and a copy of Emerson.”  This tin cup eventually evolved into the sierra club cup.

Below is a story taken from Yosemite National Park’s website:

Curious Matters: A Tin Cup with a Story 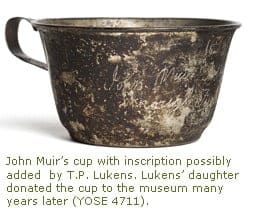 John Muir’s Cup he accidentally left along the trail.

Next is a Poem by Blanche Stallings published in the 1940 Sierra Club Bulletin:

If I had to be a cup, and wanted a delightful, varied, interesting, and useful career, I think I’d say,

“Make me neat and smooth, out of tin, stamp these words on me, ‘Sierra Club of California,’

and hang me on the belt of a good mountaineer.” Bright, little Sierra Club cups!

Over the mountains they go, dipping pure, sparkling water for thirsty high-trippers.

white streams cascading down from the blue sky, clear streams bubbling up from the ground.

changing and changeless in sunshine and shadow, cups of cold water.

In 1928 the Sierra Club did a trip into the Canadian Rockies.  The same year that Glen and Bessie Hyde disappeared on their honeymoon river trip.  One of the people on the expedition was Ansel Adams.  This is a great photo showing Adams wearing his Sierra Club cup. 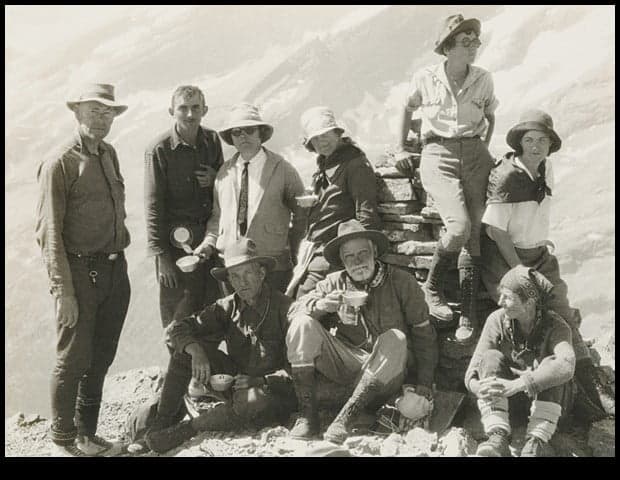 Kenneth Brower the son of David Brower who was the first executive director of the Sierra claims “it was in the mountains that I learned the cup’s real value. If the Sierra Club cup is ideal for anything, it is dipping in a stream to drink. We could do this in any Western mountain range in those days, the era before giardia. Snowmelt is the best water in the world, of course, and as a boy I tried to sample every stream. I was nearly grown before it occurred to me to drink directly from the current, like a wolf, but that felt oddly unnatural. I tried it once or twice and quickly reverted to my cup.”  He went on to tell a story:

In middle age, a father now myself, I flew by bush plane into the wilderness of Alaska’s Wrangell-St. Elias National Park, on an assignment for National Geographic. We were backpacking into a region seldom visited. Our guide, an Everest climber who knew the country, specified at the end of the equipment list he sent: Do not bring a Sierra Club cup. I bristled at this. At our first camp, when I debated him on it, he pointed out that the cup is not insulated. It burns your lips and tongue. And by the same principle that scalds the tongue—instantaneous heat transfer—the cup quickly turns hot food cold. It’s an awful little cup.

I knew all this, in a subliminal way, though I would never have put it so brutally.

But it misses the point. Communion goblets are not insulated either. Nor is the chalice in which wine is transmuted into the blood of Christ. For some of us, wild country really is like religion. For others—me, for example—it is religion, for we have been instructed in no other kind.

In Encounters with the Archdruid, his 1971 John McPhee describes the use of the Sierra Club cup ” In the mountains, a Sierra Club mountaineer eats and drinks everything out of his Sierra Club cup, and in various wildernesses with Brower I had never seen him eat or drink from anything else. In the past, in the High Sierra, he had on occasion rubbed pennyroyal-mint leaves over the embossed letters in the bottom of his cup and added snow and whiskey for a kind of high-altitude julep.”  McPhee goes on ” everything—noodles, beef, chocolate pudding—was eaten from the cups.”

The first Sierra Club cup dates back to 1905, when John Muir was fighting to keep the Hetch Hetchy Dam out of Yosemite.   It was was the cup for mountaineers for the first three quarters of the twentieth century and continues to be a symbol of that incredible time of adventure.  The original cups were stamped in tin, but changed to stainless steel after World War II. 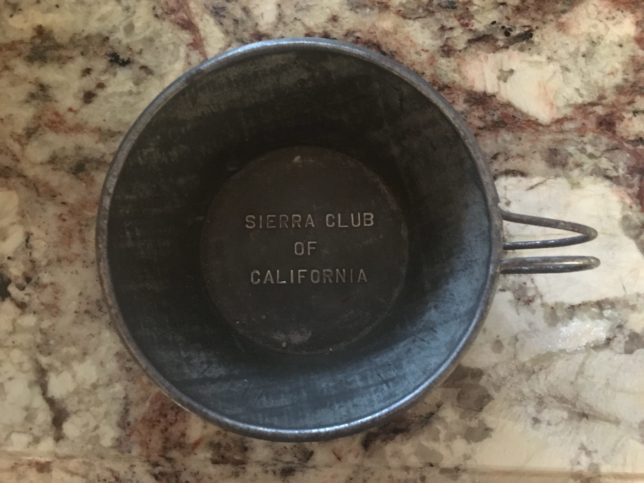 An original Sierra Club of California Cup dating somewhere between 1905 and WWII.

The photo below was taken by Bob Whitney in 1974 of Bill Trevithick in Lava Falls.  The photo was featured in the Whale Calendar. 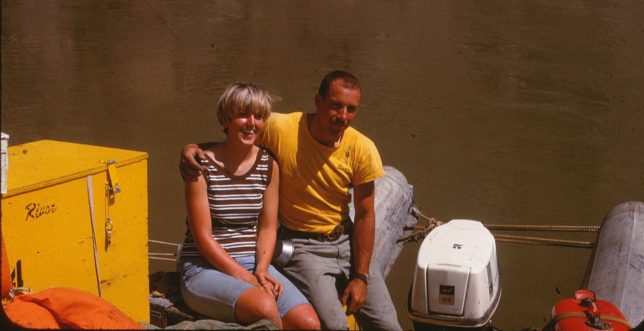