Home » #FunFactFriday » Wildlife Viewing on the Tatshenshini or Alsek—Wolverines

Wildlife Viewing on the Tatshenshini or Alsek—Wolverines

Did you know you might see a wolverine on a Tatshenshini or Alsek River Trip? 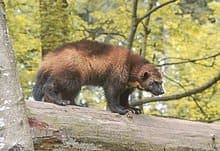 Wolverine in its natural habitat.

Wolverines have a reputation for being very mean solitary animals but a lot of stories we hear are not true. A recent study by Fish and Games researchers tracked 18 wolverines between September 2007 and March 2014 to find out just what they are up to. Here are some interesting facts they found.

It is amazing to see these creatures in their habitat from the raft or camp, so join us on an Alsek or Tatshenshini river trip for some spectacular wildlife viewing opportunities. 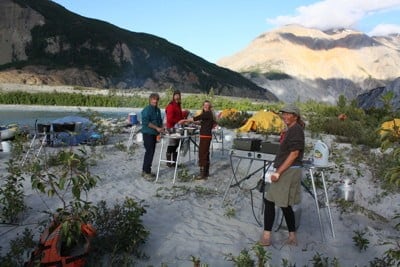 In recent years one of our best wolverine viewing opportunities happened along the Alsek River near the Fisher Glacier.  Our camp was set up along the clear blue waters of the outlet of the lake below the glacier.  The camp was full of white sand and  the camping opportunities were abundant.  We had just ran Lava North Rapid and were being treated to some of Martha Clark’s delicious Halibut Fish Tacos.  As the evening progressed Mindy Mackay noticed a wolverine running up a scree slope behind our camp.  From our viewpoint it was clear that the wolverine would not be able to rim out using this path.  The wolverine was incredibly fit and climbed the 200 yards of 70 degree vertical scree, realized it could not make it up the last 20 foot cliff, turned around, and ran back to the bottom.  Then it moved over 50 yards and tried again…finishing the climb with the same fate.  Finally on the third attempt it found a scree slope that enabled it to rim out into the pine trees above camp.  In all we had seen the wolverine for about 5 minutes.  It was one of the best wildlife viewings ever.  Although you don’t see a wolverine every trip, it is an incredible wildlife sighting when it happens.